The 2012 Scotiabank Toronto Caribbean Carnival was one to remember.

King & Queen (Thursday, August 2) – A wonderful turn out at Lamport Stadium on Thursday evening for the King & Queen competition. From the North to the South end, the stadium was full of colour and costumes. There were so many breathtaking designs from some of Toronto’s finest designers who hoped that their contestant would be dubbed King or Queen. Judges gathered under the Judging Tent to make their final decisions as later that night they crowned the winners.

Pan Alive (Friday, August 3) – With a quick switch of a few tents and the removal of the stage, Pan Alive took the crowd at Lamport Stadium on a musical ride on Friday evening. PAN FANTASY, one of the 14 bands from the Ontario Steelpan Association, won the competition by playing some of the finest sounds Toronto has ever heard. This event had a little something for everyone as visitors could take in the whole experience by watching the show from the stands, the beer tent or even the food tent. 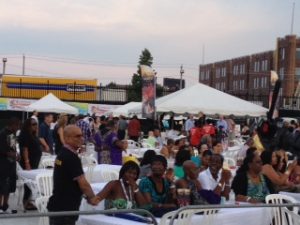 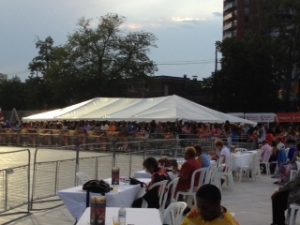 Grand Parade (Saturday, August 4) – A total of 3.5 kilometers of winding road – through the Canadian National Exhibition (CNE) and Ontario Place grounds – saw feathers, sparkles and smiles on Saturday. This parade is truly one of the best street parties that Toronto sees each year and we were so happy to have been a part of it. With the execution of more than 100 tents bordering sections of the parade, the Varsity crew threw on their orange shirts in hopes to blend in and join the collage of colour.

Beyond de Lime (Sunday, August 5) – Rain swooped its way into Sunday’s Beyond de Lime event at Polson Pier, but we were happy to help the organizers of Carnival on a back-up plan to keep everyone sheltered. Vendors and festival goers sought cover under the numerous amounts of Scotiabank pop up tents on the patio for the first portion of the event. We are however happy to report that the rain took a back seat to this closing Carnival event and everyone left feeling satisfied and excited for next year.

We are very pleased to work with the great folks of the Scotiabank Toronto Caribbean Carnival each year.

Do you have an event that requires multiple tents? We can help! Contact us for FREE estimate.